The story is about Pauline Waithera who is 43 yrs old, she now does small scale tailoring business

She separated from her Husband due to financial issues and other irreconcilable differences which made them part ways. She migrated to the city of Nairobi, looking for green pastures but nothing seemed to alleviate her financial woes. Her Aunt who welcomed her to the city later turned out to be a pimp. She introduced Pauline to different men as a means of survival. Though initially, it was difficult to accept, eventually she succumbed to the practice, and slowly by slowly it became her way of life.

She narrated that she had practiced prostitution for over 20 years, which according to her, took care of her basic necessities of life. Pauline once got pregnant and miscarried, which made her very sick for almost two years. She visited several hospitals but once being discharged, returned to her normal trade. When she fell sick again, she decided to test for HIV because she said she didn’t use any protection at all when attending to her clients. The moment it was declared that she was HIV positive, it sounded like a death sentence being pronounced by a judge.

He was not a religious woman initially and would go to church occasionally, during festive like Easter, Christmas and the New year eve.

It was while pondering what to do with her life that Pauline met with a community health worker. The community worker invited her for a Monthly fellowship at Nuru. It was there that she also got to know other ladies who had similar encounters like her. (Reaching Rehab Ladies) She was nurtured in faith and once in a while, the Nuru coordinator would visit her at her home, a fact that made her open up more to the gospel. She was introduced to The Nairobi international Lutheran Church which was within her neighborhood.

Pauline is one of the ladies who were enrolled for the vocational college to be trained on alternative means of fending for herself. We thank God that she was among the six who graduated this month after successfully completing her courses. We are surprised by her transformation and her desire to live for God. 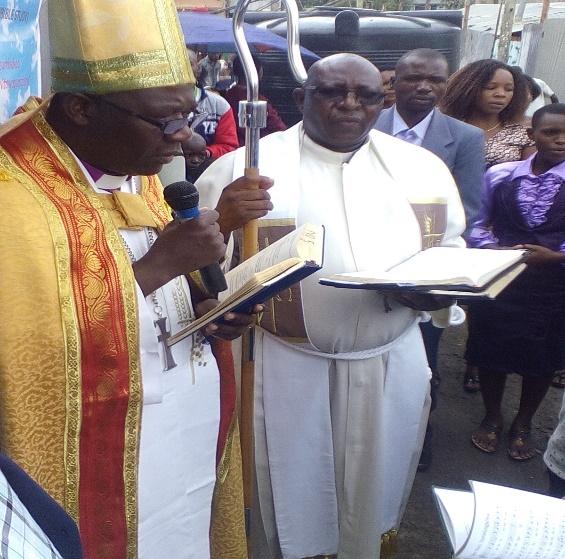 Some years ago, we had a weekend Challenge outreach mission in the slum near the Airport and next to Nairobi National Park. The place was surrounded by industries and factories just to recall. In tandem with our mission statement of bringing Christ to the nations, we equipped the saints and had a one to one evangelism within the village and thereafter, we had a film show in the evening on the life of Jesus Christ and that was the birth of Kenya Ports Authority(KPA) Congregation which later moved to Kenya Pipeline Village. And because of passionate Faithful People, The Congregation through friends purchased a plot that the Current Church Structure is built on. 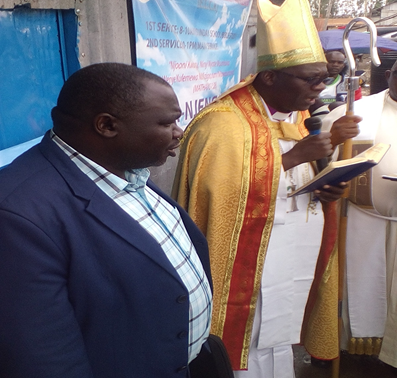 The Congregation has grown big and what we see is the product of the passionate believers that want to share the Love of Christ to Neighbors and especially the Unreached.

They are very grateful to Nuru for helping them especially with evangelism and medical camps in their area finally they have found a place to call home. Last year the congregation was officially opened by the presiding bishop Joseph Ochola. We give God the glory for the work which has been done.

The story is about our ETS commissioned volunteer, Mr. Romo is 35 yrs old who is a pastoralist in Kajiado county.

For a long time, they have not had a resident pastor hence the challenge in getting Clergy related services like holy communion and baptism. He was initially not a Christian but practiced the Maasai traditions, he was engaged in the activities of his community and had been initiated to the warrior age group known as the “morans”.

Life in his cultural beliefs was empty and not fulfilling. Deep inside him he had the quest to search for the true living God. He had an encounter with missionary from Norway for a short time and hence was convicted of the Holy Spirit to faith. He was nurtured by Local Lutheran pastors who were not regular because of the interior distance of their church locations.

In the year 2011 he was chosen among other people from his region to an ETS in Nairobi conducted by Nuru. The former board chairman the late Mathew Ole Esho invited him to come along.

The teaching and shared experience challenged him to be proactive in ministry. He volunteered to be a lay evangelist to his people and has been using the BCC and other Nuru materials to nurture his community in faith. His people recognize him as a pastor. We are grateful as the Nuru family to have encouraged and nurtured him in faith.

The story is a bout a 42 yrs old security guard called Mr. Anderson.

Mr. Anderson is a security man working at one of the secondary schools in Kambu, Makueni county. He came to our clinic to seek help because he had challenges with his vision. He had a growth in his right eye which made him very uncomfortable for a long time.

For a long time, he has been captive to the animistic belief of witchcraft to the extent that seeking conventional medicine was a problem. Every ailment according to him was attributed to witchcraft and thus he has been living perpetually with fear. Nevertheless, when he heard that there is a medical outreach within his location he decided to go and seek help because all the herbs he has been using failed in alleviating the pains in his right eye.

After sharing his ordeal, he was referred to pastor Joseph Nguku for further spiritual counseling and guidance. He had the opportunity of listening to the gospel in a special way and he decided that he wanted to know more before committing his life to the Lord. He thanked the ministry for the opportunity of giving him free medication which was a good relief from severe pain in his eye and promised to link with pastor Joseph Nguku for further advice.

Nuru Lutheran Media Ministry is a subsidiary of Lutheran Hour Ministries whose headquarters in St. Louis, USA. It is a para-church organization affiliated to Evangelical Lutheran church in Kenya, whose main objective is evangelism using various forms of media.